With an episode with the knife-edge cliffhanger to rival the ‘Who Shot JR?’ Dallas episode, the RICHY27ABLE  channel’s first season drew to a close on Tuesday 15 June with the much awaited SEASON FINALE. 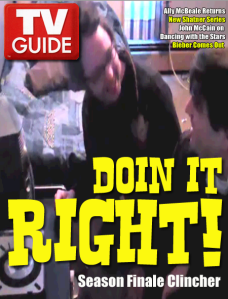 Playing to tens of viewers stateside and countless on the Worldwide Web the series was universally acclaimed by critics and the across the Blogosphere and the Twitterverse.

The New York Times described the final episode as ‘Fellini-esque and quite superb’ while Egyptian dissident Hamand X tweeted “for 3 and a half minutes, the revolution stopped 🙂 for 200 seconds there was no conflict :O”, as he shared his iPod screen with soldiers who minutes ago had been sniping at them but laid down their arms to join the rebels in another kind of revolution, the YouTube.

Adding to the speculation is the question mark over Bens participation in the next series following the runaway success on the independent circuit of his ‘Fusil de Chasse’ following its last minute inclusion as a short at Sundance this year. Whist Ben dismisses such rumors as speculation it was widely reported he was seen in long discussions with Redford following the screening.